Big wall climbing in the Dolomites

The Marmolada, so-called Queen of the Dolomites, is the highest peak in the Dolomites: on the north side is the glacier crossed by the regular route. The sunny, south-facing side plummets down 900 vertical meters. As much as Yosemite Valley’s El Capitan, more or less. The Marmolada is neither the only nor the highest big wall in the Dolomites. The longest climbing route in terms of vertical ascent is probably the lesser known Agner’s north edge, with its 1600 metres of ascent. The huge rampart on the north-west face of Mount Civetta sports 1200 metres of ascent. Besides these notorious faces, there are many many others involving a big wall climbing between 500 and 1000 metres. Regardless of the specific route, climbing these monsters is something for the truly motivated climbers.

the tallest in the Dolomites

Most of these itineraries involve an afternoon-hike up to a mountain hut as close as possible to the face, in order to cut on the approach times the following day.

The general difficulty level of all routes shown in this section is medium to high, mostly due to the length and the environment, which can be harsh. Generally, routes are fitted with traditional pegs. These can be augmented with additional protection.

The guide can provide all technical equipment and clothing, except for climbing shoes. To find out more about what to bring, please see the relevant page.

Demanding routes require a competent mountain guide, but also a fit enough client. Prior to the big wall climbing, and especially with new clients, we ask you to climb together a warm-up route.

Our climbing activities are carried out by a mountain guide or, more precisely, a Mountain Guide that is UIAGM/IFMGA certified. In Italy, this is the only certification allowing a guide to accompany clients on rock. Besides, local alpine guides most definitely sport the best knowledge and will guarantee your safety and your fun. 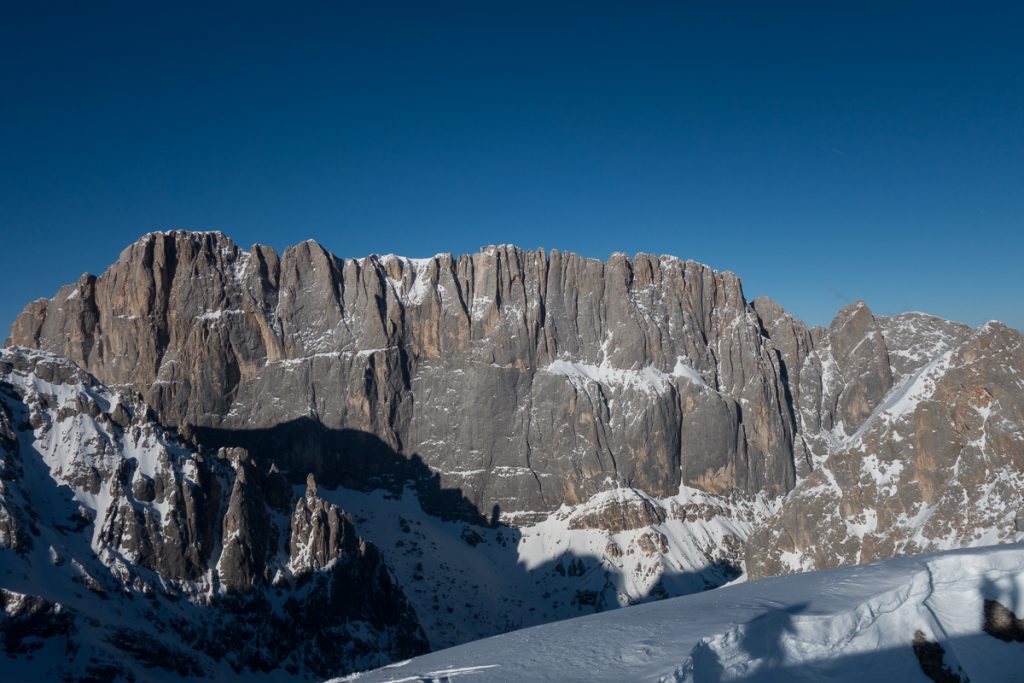 the Marmolada’s south face, also known as Silver face, is a huge limestone rampart with heights up to 900 metres, sporting around 190 climbing routes, many of them still unrepeated. Luckily, a ledge cutting through almost the entire width of the face is a welcome respite, allowing to tackle the face in 2 days with a comfortable overnight bivouac, often inside a small natural cave.
The climbing route is often on limestone slabs of excellent quality, where water has relentlessly carved many holes and grooves.

is the quintessential modern classic. Most technical steps are around the IV and V grade. Nevertheless, some of the harder pitches give a taste of climbing “Marmolada style”.

Considered an “extreme classic”, its beauty makes it one of the most spectacular rock climbs in the world.

It’s the south face normal route. Despite its apparently moderate grade, it is still a demanding climb given the environment and the rock quality. 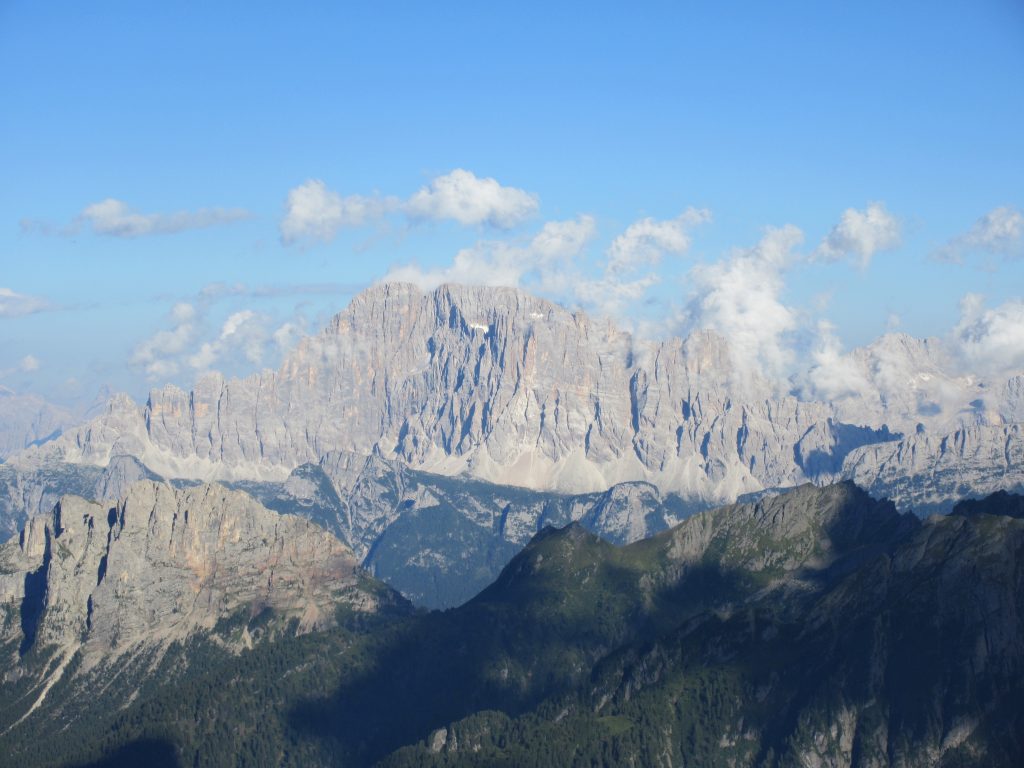 A glorious 1000 metres high and 4 km long face. Its peculiarity is a hanging glacier at altitudes between 2650 and 2800 metres. This is a very quintessential north-face environment. The mornings are bitter and cold; when the sun comes out to warm our skin up it means we haven’t got much daylight hours left! Rock quality varies between the absolutely terrible and the incredibly amazing.

This route made history as the first grade VI route. In G. Buscaini’s words: “a great classic, where technical difficulties are to be found alongside an austere environment”.
PUNTA TISSI, Philipp-Flamm dihedral, 800 metres, grade V+/VI.

Strenuous climb along cracks and chimneys, generally tackled between July and August once ice in the deepest chimneys has melted.

A free-climbing masterpiece, mostly alongside dihedrals and chimneys. 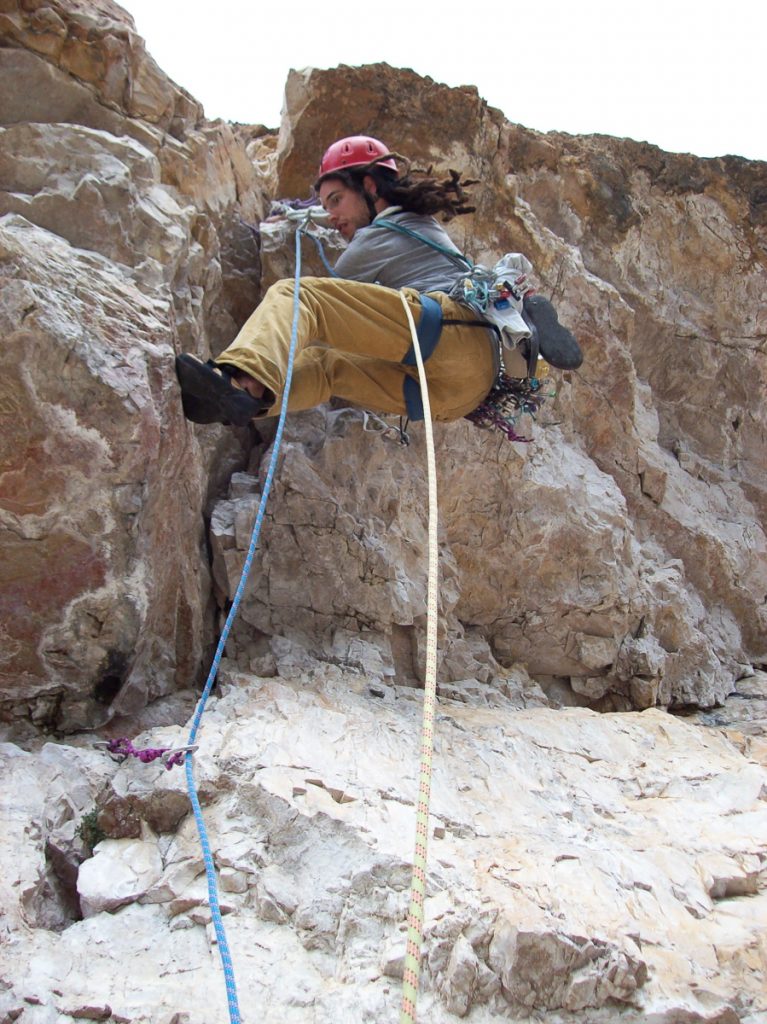 a great, complex face towering over Cortina d’Ampezzo valley. Its distinctive characteristic is a total big wall climbing reaching 800 metres below the main summit, with shorter pillars around like castle walls. The climbing is along great quality Dolomia rock, which is also responsible for its distinctive reddish colour.

Classic route in a spectacular environment, right in the middle of the south face. Despite its moderate grade, its length nevertheless requires a good level of fitness.

A long crack runs the face centre, the line tackled by this incredible route, whose distinctive features are two pronounced roofs, easily overcome with aids, and an overhanging chimney called “mule’s back”. 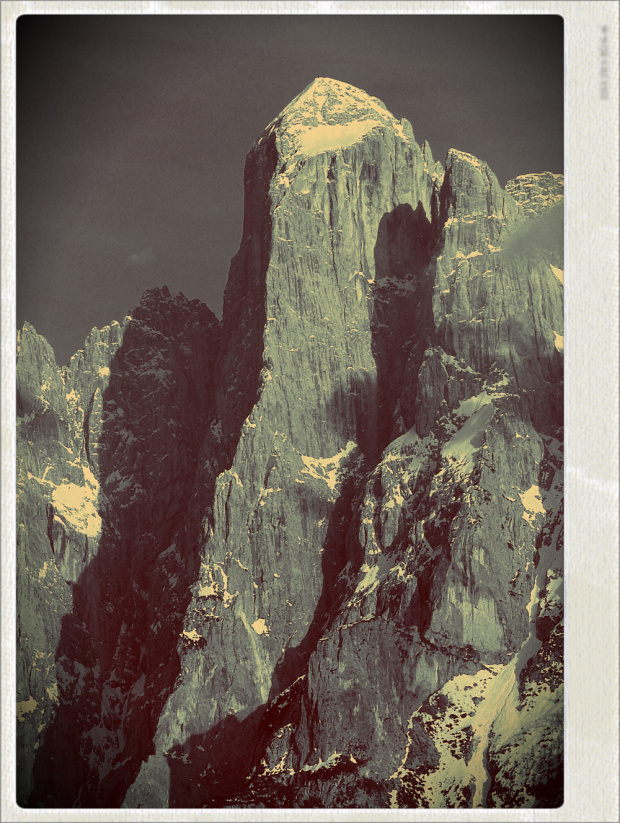 Incredibly high rock faces rise up from the bottom of wild and mysterious San Lucano valley. The Agner’s pyramid stands tall above the faces of the pale di San Lucano and everything else around it: an incredible, 1600 metres high jump in the void. The north face sports several routes, many of them rather extreme except for the North edge. Its shape is the most elegant however its climb is of moderate difficulty.

This route starts with extended vertical sections, broken by short linking hikes along mountain pines. Once past the halfway point, this route becomes more and more exposed, more and more beautiful and challenging. Climbing this route is setting ourselves along a long, vertical journey. An overnight bivouac is the ultimate gift of an unforgettable adventure. 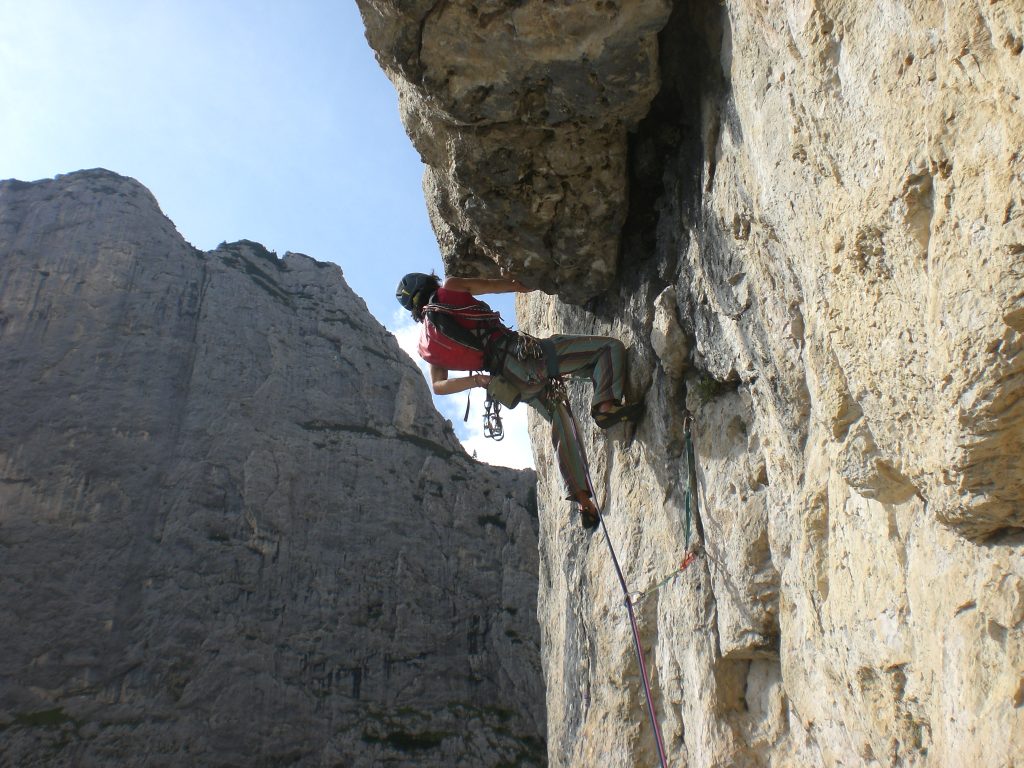 “Devastatingly beautiful, higher than any other in its perfection and the power of its architecture. It truly deserves to be named The Tower of Towers” (D. Rudatis). The tower rises isolated from the surrounding peaks, powerful and slender. All the big wall routes climbing Torre Trieste require considerable efforts given their length and the complex descent. The south-face is the most impressive, its face shown to whoever looks up from the valley below.

Great classic route by one of the greatest alpinists in history: Riccardo Cassin. The route climbs up along a line reaching for the weakest points of this edge. The first section is along brittle rock, nowadays fairly clean, the second section climbing starts to get exciting along cracks and dihedrals.
SOUTH FACE, Carlesso-Sandri route, 600 metres, grade VI+/A0.

This was the first route successfully tackling and conquering the south face, an incredible feat in its times. It is still many a climber’s dream to this day. The brittle rock has been cleaned up these days, the hardest sections sport some excellent rock. 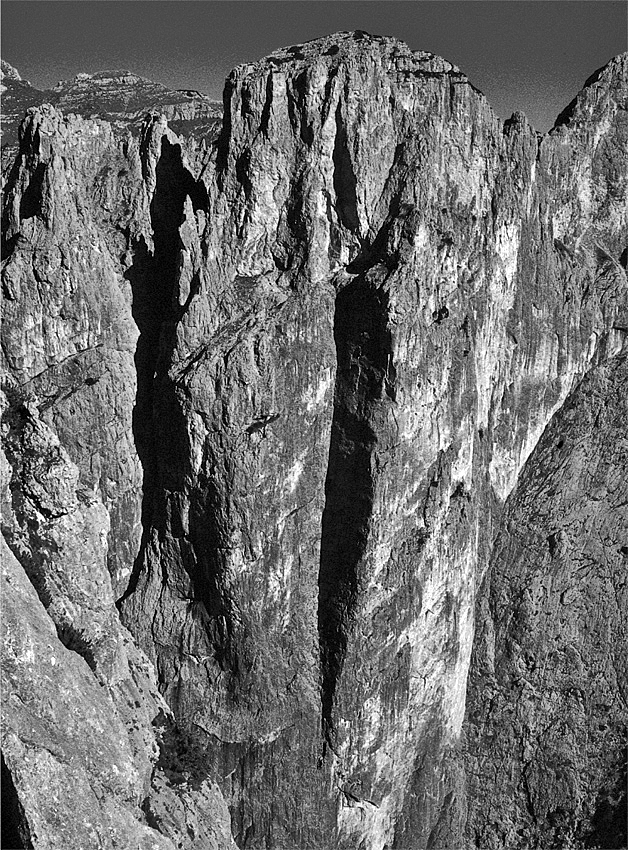 Mysterious and remote, San Lucano valley is surrounded by some of the highest and most imposing cliffs throughout the Alps. Spiz di Lagunaz towers high among them. Casarotto dihedral is the absolute gem in its west face.

This route is set in an environment among some of the most isolated and fascinating in the Dolomites. Reaching the start of the big wall climbing is already a fairly demanding hike from the base. The route then follows excellent rock, with the trickiest sections just before entering the real dihedral. Once on the summit, it’s not over yet: a long and complex descent is on the cards. 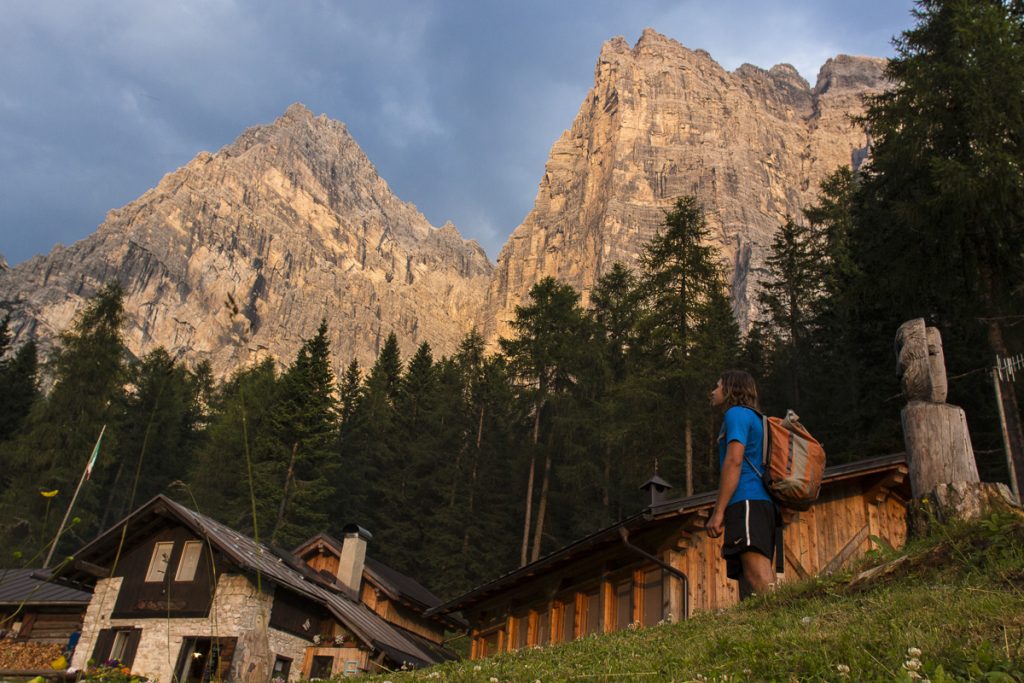 This peak is found in a slightly hidden, lesser-known corner of the Dolomites. Indeed, the first completion of a climbing route here only dates back to 1964 by climbers from Cortina. Since then, many climbers followed along the many folds of this majestic mountain, never quite getting enough of the beauty of this rock but also the calm peace to be found around the Bosconero refuge.

NORTH-WEST EDGE, Strobel route, 750 metres, grade VII+/A0. The route runs along the impressive North-west edge, criss-crossing whilst looking for the cracks and dihedrals allowing to get past it. Rock quality is consistenly good to excellent.

NORTH FACE, Navasa route, 750 metres, grade VI+/A0. According to many of the ones who repeated it, this is the Rocchetta’s greatest route. The rock is solid, its richness in holds is impressive and for this reason, many of its roofs can be tackled just by free-climbing. 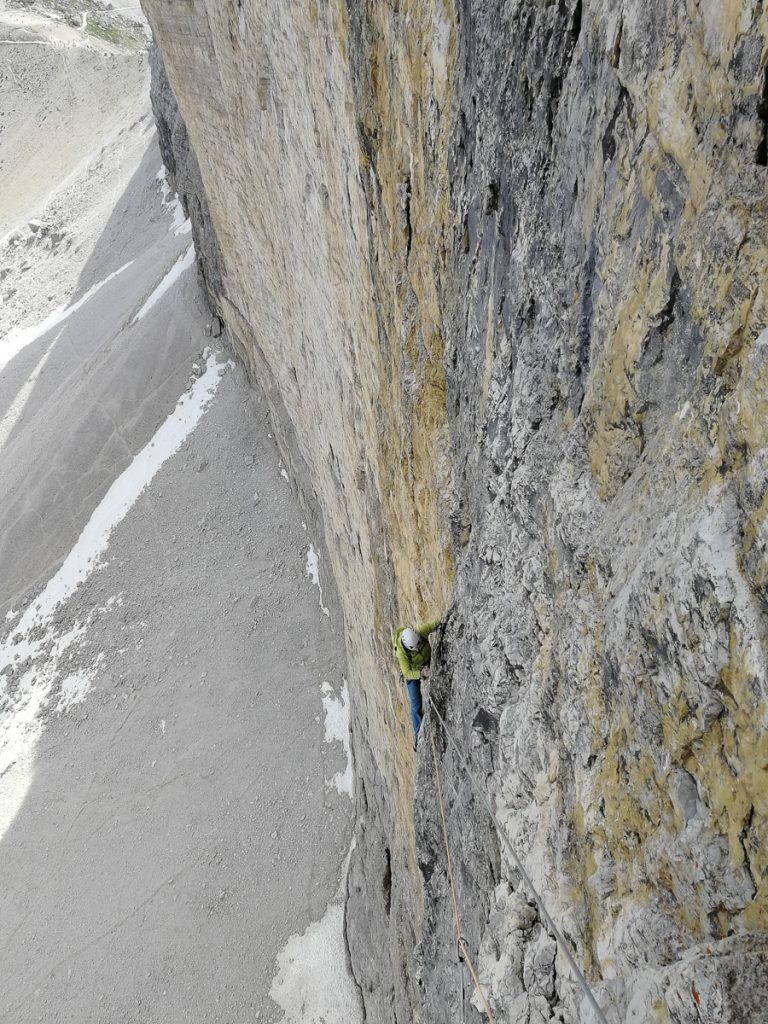 The great north faces of the Three Peaks of Lavaredo are probably the most photographed and dreamed of moutnains in the world. The constant exposure and sense of void makes them unique among the great Dolomites  big walls. Climbing here is always demanding and doesn’t allow for any respite. Once on top, the sense of achievement is fathomless.

CIMA GRANDE (GREAT PEAK) OF LAVAREDO, Comici-Dimai route, 550 metres, grade VI+/A0. A classic, the abundant pegs ease off the climb, but the exposure is constant and unbelievable.

WEST PEAK OF LAVAREDO, Cassin-Ratti route, 450 metres, grade VI+/A0. Whilst the Great Peak’s north face is a yellow overhanging blackboard, the west face’s distinguishes itself by its imposing roofs in the lower half, and some grey vertical rock in the upper half. The route manages to cut through these overhangs with a long 2-pitch traverse, through which the incredulous climber will be taken to the summit.